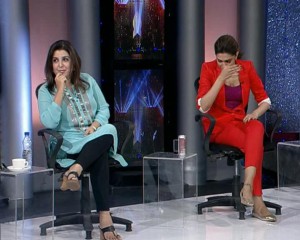 MUMBAI: Too much happiness seems to have made actress Deepika Padukone teary-eyed. Team Happy New Year had some emotional confessions to make when they visited the A TV  studio on October 21.
Actors Shah Rukh Khan, Deepika Padukone, Abhishek Bachchan, Boman Irani, Vivaan Shah and the film’s director Farah Khan have been shooting for the film for almost 200 days followed by a series of concerts to promote the film. All this has created a strong bond among the team.
Boman, who got nostalgic at the show said, “We’ve been breaking-up, getting teary eyed now and then. People have been hiding behind little corners doing their little sniffles. And I feel it’s a beautiful thing to feel like that for someone whom you may not be able to see for some time.”
Deepika, by this time, was in tears, even as Farah asked shakily, “Why are you making us cry, Boman?” Boman continued, “This is the purity of staying together for more than 200 days and not wanting to let go.”

He said, “Today we were watching Main Hoon Na in Shah Rukh’s room, and we were recalling every moment of the film. I can tell you 25 years from now, we will be sitting in some hotel room, in some corner of the world, watching Happy New Year and feel the same.”
This emotional anecdote brought forth more tears from Deepika. Both Deepika and Farah looked emotional, trying to fight back their tears. Shah Rukh later called Deepika and Farah “lovable emotional fools” and tweeted: