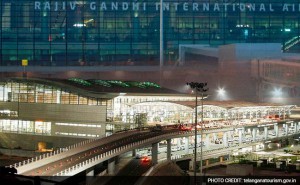 HYDERABAD: At least 70 passengers were offloaded from a Raipur-bound IndiGo flight at the Rajiv Gandhi International Airport in Hyderabad last night on the grounds of “unruly behaviour”, the airline said.The passengers countered the charge, filing a complaint with airport police alleging they were harassed by the airline staff.
The incident happened between 8:30 pm and 9:00 pm. The passengers, who were travelling to Raipur from Hyderabad in a group purportedly were trying to exchange seats among themselves.
An altercation erupted between the cabin crew and some passengers over this.
“The cabin crew then called the ground staff to assist them. The situation worsened and led to the extent of offloading of passengers,” airport police inspector T Sudhakar said. The passengers in a complaint alleged that they were harassed by the airline’s staff .
He said the passengers in a complaint alleged that they were harassed by the airline’s staff and the flight took-off without handing them their check-in baggage.
The airline in a statement said the passengers were offloaded “on the grounds of unruly behaviour” and a First Information Report has been lodged with local police.
Some of the male passengers (of the group), who were standing in the aisle, did not pay heed to the repeated requests made by the cabin crew to take their seats before closing of the aircraft doors for take-off, IndiGo said in a statement.
They then “began to brush their luggage against one of the crew members”, it alleged.When ground staff requested these passengers to cooperate with the crew, they started shouting and made “threatening” remarks, the airline alleged.
Despite their “unacceptable” behaviour, IndiGo “went out of its way” to ensure they all are served meals at the airport and accommodated on the subsequent flight free of charge, the airline said.