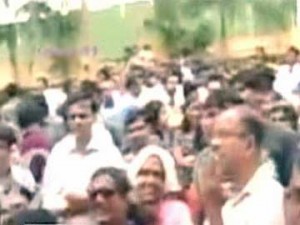 BANGALORE: The alleged rape of a six-year-old at a prominent school in Bangalore has enraged the city and triggered massive protests by parents.The union education ministry has said it will examine the incident. A large group of parents protested outside Vibgyor High School on Thursday demanding that its management take responsibility for their children’s safety.
Protesters broke down locked school gates and entered the building as the police tried to restrain them. A window was broken.  “My child studies in Class 1 here. I don’t even know whether I can send her to school anymore,” a parent shouted. The school’s chairman, Rustam Kerawalla came out and promised safety. “We will install CCTVs and ensure background checks of staff,” he told agitated parents, many of whom have full-time jobs in the bustling IT city and had never before worried about their children during school hours.
On July 2, a Class 1 student was allegedly raped by two gym instructors during school hours. The child had reportedly left the classroom to use the washroom when she was attacked. The incident was reported a week later. A police officer has said three people have been detained and the role of the school is also being examined.
Anger has snowballed with many schools in the city declaring that they can’t be held responsible for the safety of students. They have asked parents to sign a form that the school’s staff or teachers can’t be held responsible for “damage to loss of property, sickness or injury from ‘whatever source’ legal entanglements, loss of life or money…”
“We collectively refuse to sign such a form,” a parent said, adding, “My child spends 6-7 hours in school. I am at work. I can’t be with her. The school has to protect her.”This is the second incident this month to raise questions about the safety of children in schools in one of India’s most cosmopolitan cities. Last week, another six-year-old in another school was picked up from school by her own aunt who later murdered her over a family dispute.