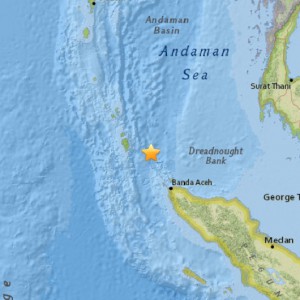 A powerful 6.1-magnitude quake struck Indonesia’s Sumatra on Sunday, US seismologists said, but no tsunami warning was issued and there were no immediate reports of damage or casualties.
The undersea tremor struck at a depth of 75 kilometres (47 miles), 111 kilometres south of the city of Sibolga, in North Sumatra province, the US Geological Survey said.
Mochammad Riyadi, a senior official from Indonesia’s meteorology, climatology and geophysics agency, said the quake was felt strongly for 15 seconds in Mandailing Natal district, which is around 85 kilometres from the quake’s epicentre.
“Moderate tremors” were also felt in Padang, the capital of West Sumatra, he said.”We have no reports of damage or casualty so far. No tsunami alert was issued,” he said.
An AFP correspondent in Padang said “the earth swayed back and forth for around 10 seconds”, but the majority of residents remained calm. Indonesia sits on the Pacific “Ring of Fire” where tectonic plates collide, causing frequent seismic and volcanic activity.