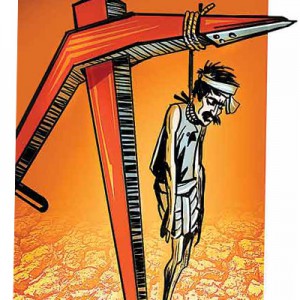 NASHIK: Five farmers have committed suicides in last five days since December 1, 2015 in Nashik district out of which four have been in Malegaon tehsil and one in Igatpuri.
Sunil Desale, 35, a resident of Sherul village in Malegaon, hanged himself from a tree to end his life. A bus driver who was taking his bus from Chinchagavhan to Dhule was passing through Sherul on Friday when he saw a body hanging from a tree in a farm in Hiswal area of the village. He reported to the villagers who rushed to the farm and identified him as Sunil Desale.
Sunil’s wife had committed suicide two months earlier. Two persons ending their life in a span of two months has sent the family into shock. The couple leaves behind two sons, aged 6 and 4.
The Desale family owns five acres of farm land and had taken a loan of Rs six lakh.
They had also started a poultry business, but the poultry shed was blown away by a storm two years ago. They still have to repay the co-operative bank loan for the poultry. Unable to bear the personal and financial loss, Sunil must have pushed himself to end his life, villagers said.
Another farmer Krushna Shinde, 40 years, ended his life on December 3, 2015. Krushna, an ex-serviceman had retired from the Indian army after a service of 13 years.
He has since taken to farming at his native village at Waghere in Igatpuri tehsil. He had taken a loan for digging a well and to start a dairy business. Two months ago he had taken a loan from a private bank also.
Burdened by the losses in agriculture and the rising expenses of his children, ailing parents and the marriages of his brother and sister, Krushna consumed pesticide in his farm on Thursday afternoon and ended his life. When family members realised this, they rushed him to the civil hospital in Nashik. However, Krushna breathed his last on Friday morning.
On December 1, three farmers from different villages in Malegaon tehsil ended their lives in separate incidents.Ganesh Bachchav, 33, a resident of Sonaj village, ended his life by hanging himself from a tree in front of his house in the farm.
Ganesh had little more than one acre of dry land and he had taken a loan of Rs one lakh on it. He was dealing with the failure of his crop and taking care of his ailing father and daughter. His brother is also said to be under medical treatment. Unable to make ends meet, he ended his life.
Pravin Magar, 48, consumed pesticide on the morning of December 1 and ended his life. The Magar family owns collective land. Pravin had 2 acres as his share however his land was dry. He had a loan of Rs 3 lakh which he had to repay.
Mahesh Sonawane, 36, resident of Padalde village also consumed pesticide in the afternoon of December 1. Mahesh had taken onion, cotton crops on his five-acre land. But the drought situation with no water led to losses. He had a debt of Rs 75,000.
Malegaon has faced drought for three consecutive years leading to huge losses to crops in the region. The farmers have been in distress as their worries were added by unseasonal rains and hailstorm. For the last 11 months till December 5, 19 farmers in Malegaon tehsil alone have ended their lives.
“This is a very sad situation. We have been counselling farmers and trying to create awareness that ending life is no solution. Efforts are being made to help.
Even the officials are counselled and briefed to have a dialogue with the farmers at the local level to discourage any such tendencies.  We have even requested the banks to be considerate and not pressurise for loan repayment immediately but give the farmers extended time to do so.
The situation is tough and we have to see that the farmers do not take the extreme step”, stated resident district collector Ramdas Khedkar.