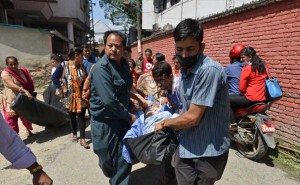 NEW DELHI: A new 7.3-magnitude earthquake and several powerful aftershocks shook Nepal on Tuesday killing at least 42 people and triggering panic in the Himalayan nation already devastated by a massive temblor less than three weeks back that had claimed over 8,000 lives.Nepal’s Home Ministry while putting the death toll at 42 said another 1,117 people had been injured in the latest quake that hit hardest in remote mountain districts northeast of the country’s capital Kathmandu.
The epicentre of the strong earthquake that shook Nepal was close to Mount Everest. The epicentre was 68 km from Namche Bazar, northeast of Kathmandu. Reports further said that seven quakes were reported in quick succssions in Nepal between 12:35 pm to 2 pm.
Namche Bazaar is the starting point for those who want to climb Mount Everest. The distance between Namche Bazaar and Mount Everest is about 30 km.
Mount Everest is the world’s highest peak at 8,848 metres. Reports reaching here said that there was considerable panic in Namche Bazar, especially after the April 25 earthquake. Some high-rise buildings have also suffered serious damages due to the quakes. People in the capital Kathmandu ran out of their houses.

Kathmandu airport was initially evacuated as a precautionary measure, however, it later resumed its normal business. Nepal’s Foreign Minister Mahendra Pandey said that telephone lines have gone dead but efforts were on to restore telecommunication services across the country. Most of the people are out on the streets. The Nepal Cabinet will meet soon for damage assessment, he added.
Three major landslides were reported in Nepal’s Sindhupalchowk region where at least 12 people were injured.
The US Geological Survey (USGS) said that the quake that hit Nepal measured 7.3 on the Richter scale and struck at around 12:35 pm, some 83 kilometres east of Kathmandu at a depth of 18.5 kilometres.Strong tremors were also felt across vast stretches of east and northeast India. The quake also jolted Afghanistan, China and Indonesia.
Quake rattles North India
The quake had its impact in several cities in Bihar, West Bengal, Delhi and UP etc. Delhi and the NCR region felt strong tremors at 12:35 pm. Earth shook for over 20 seconds. Other areas in North India and East India, including West Bengal, Bihar, Jharkhand and Assam, felt the impact of the earthquake.
A Met official said the epicentre of the earthquake was 70 kms south-east of Nepal and measured 7.1 on the Richter Scale. However, he described it as an aftershock of the major one on April 25 that measured 7.9 on the Richter Scale.
Fresh aftershocks were felt in the national capital at around 1.13 pm again.
PM Modi reviews situation
Prime Minister Narendra Modi took stock of situation soon after fresh earthquake hit Nepal and tremors were felt in parts of the country.
No need to panic, says Home Minister
Union Home Minister Rajnath Singh also took to Twitter to confirm the news. The Home Minister, however, said there is no need to panic.Rajnath Singh also spoke to Home Secretary LC Goyal and India’s Ambassador to Nepal Ranjeet Ray, and asked the NDRF to be on alert.
India will provide full support to Nepal wherever required, Singh was quoted as saying by ANI. Singh, accompanied by NSA and Home Secretary, also briefed PM Modi on the earthquake situation.
OP Singh, DG, NDRF said that the force has been put on alert mode and is ready to provide all assistance wherever needed.

LS Rathore, DG, IMD, while addressing a press conference, warned that aftershocks will continue for weeks or may be months. The IMD chief said though shocks have been felt in almost entire India but intensity was very high in areas adjoining Nepal. The earthquake of magnitude 7.3 was registered at 12.35 pm, 65 km, east of Kathmandu at a depth of 18.5 kilometres, he added. It was followed by three aftershocks of 6.2, 5.4 and 4.8 on Richter scale, the IMD chief said.
The IMD has classified Nepal earthquake as “major”.In the wake of devastating earthquake in Nepal, a meeting of the National Emergency Committee has also been convened at 4 pm today.
Metro halted after tremors felt in Delhi
In the national capital, the Delhi Metro was brought to a halt as per standard operating procedure. Thousands of passengers across the Metro service felt strong tremors.Government and private offices were immediately evacuated.
Eight dead in India due to massive earthquake
At least eight people, including three children, were killed and nearly two dozen people were injured when a massive earthquake caused walls to collapse in parts of Bihar, News Agency quoted officials as saying. A labourer was killed when an under-construction wall collapsed in Danapur near Patna and a child was killed in Siwan district when a wall collapsed. Another child was seriously injured, officials of state disaster management department said.
Two children were killed in Manigachi in Darbhanga district in a wall collapse and a woman was killed in Dumra of Sitamarhi district when she came under the debris of a wall that fell. One person died in Hajipur in Vaishali district, Nawada and Saran districts due to the quake.
Over half a dozen girl students of a government middle school at Bihya in Bhojpur district were injured when they were trying to rush out of classroom.In Forbesganj in Araria district, bordering Nepal, at least 12 people were injured in a stampede during the quake.
People in Patna, Darbhanga, Purnea, Kishanganj, Madhubani, Jehanabad and Aurangabad felt the tremors for over a minute.
India says no rescue team till Nepal asks for help
Meanwhile, said today that India will not send any rescue team to Nepal to assist the local administration unless the neighbouring country seeks help in the wake of Tuesday’s earthquake.”Government will wait for a call from Nepal before sending any rescue team to Nepal,” a source privy to the deliberations at the highest level of the government said.
The move bears significance as after about 10 days of the April 25 earthquake, Nepal had abruptly asked all foreign rescue teams, including India’s National Disaster Response Force, to return home.
The government, however, has kept the NDRF and the Indian Air Force in full alert and on standby to respond to any emergency call from Nepal.