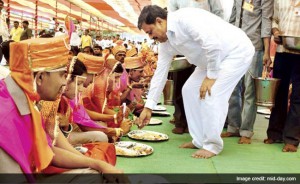 PUNE: An election is a battle of sorts, for the candidate, as well as their entire family. Were Dhritarashtra (king of Hastinapur in the epic, Mahabharata) to step into the fray, he would have had a hundred sons and a daughter to back him, but a BJP candidate in Solapur has gone one better.
As many as 4,000 ‘daughters and sons-in-law’ are campaigning for Subhash Deshmukh, a former MP who is now contesting the state assembly elections from the Solapur-South constituency.
And how did he come to have so many daughters and sons-in-law? Amongst other social welfare programmes Deshmukh has organised under the banner of the Lokmangal group founded by him, for the past seven years, he has also conducted community weddings for 2,000 girls from both economically and socially backwards sections of society.
Every November, he holds community marriages for such girls, to ensure that their families do not have to enter crippling debts or sell their farmland to pay for wedding expenses. Apart from the ceremony, he also provides basic amenities to the newly-weds in the form of clothes, utensils and necessary infrastructure for them. And, most importantly, he presents them with R5,000 if they are blessed with a baby girl. This amount matures once the girl reaches 18 years of age.
Having brought 2,000 couples together this way, Deshmukh now has an enviable cavalry of campaigners supporting him as he is pitted against Congress’s Dilip Mane in the approaching polls.
Deshmukh is clearly proud of the accomplishment. “Arranging a marriage is a matter of pride for any father. I have often witnessed that a majority of farmers sell their land or approach moneylenders for this. To break this vicious cycle, we embarked on this mission, and, so far, have conducted weddings of 2,000 girls in the past seven years,” he said.