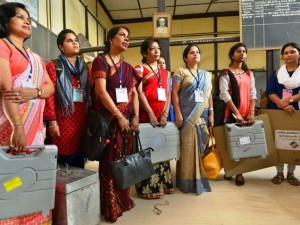 GUWAHATI: First phase of assembly elections in Assam will be held tomorrow in 65 constituencies spread over eastern, northern and southern parts of the state. Polling will begin at 7 AM and go on till 5 PM. A total of 539 candidates are in the fray, including 43 women.
Out of the 65 constituencies, ten have been reserved for Scheduled Tribe candidates and three have been reserved for Scheduled Caste candidates.
More than 95 lakh voters will decide the fate of prominent candidates like Chief Minister Tarun Gogoi and BJP Chief Ministerial candidate Sarbananda Sonowal. The polling for this phase will be conducted in over 12,000 polling booths. Congress has fielded a total of 65 candidates, BJP has fielded 52, and AIUDF has fielded 27.
The distribution of polling material has started and all the 12,190 polling parties will be in their destination by this evening. A total of 616 polling parties had already left for their remote polling stations yesterday.
Around 433 companies of Central Armed Police Forces and 102 companies of State Armed Police Force have been deployed to ensure smooth polling tomorrow. A total of 539 polling stations will have webcasting facility and 454 have been installed with static video cameras. The total number of polling stations manned by women polling officers are 78.a

The ruling Congress, the BJP-AGP-BPF alliance and the AIUDF are locked in a keen battle as the stage is set for the first phase of Assam assembly polls to be held amidst tight security on Monday for deciding the fate of 539 candidates in 65 of the 126 constituencies.
An electorate of 95,11,732 including 45,95,712 women, will exercise their franchise in 12,190 polling stations with the number of hyper-sensitive and sensitive booths yet to be released by the election office here.
Indo-Bangla border along Barak Valley’s Karimganj district sealed and more than 40,000 security personnel deployed in the 65 constituencies spread across Upper Assam, hill districts, northern banks and Barak Valley.
More than 48,000 polling personnel have been deployed in the first phase with those in remote areas leaving for their respective polling booths since Friday evening.
The first phase will witness mostly direct contest between the ruling Congress and the BJP-AGP-BPF alliance though the AIUDF has put up candidates in 27 constituencies where the fight is expected to be triangular.
The Congress is contesting in all the 65 constituencies in the first phase while BJP is contesting in 54 and its alliance partners — AGP in 11 and BPF in three, the AIUDF in 27, the CPI and CPI(M) in ten each with CPI(ML)(L) in six along with 60 others of unrecognised parties and 13 independents.
Among the 539 candidates in the fray, 496 are males and 43 females in 45 constituencies of the Brahmaputra Valley, five in the two hill districts of Karbi Anglong and Dima Hasao and 15 in the Barak Valley.
The prominent Congress candidates in the fray are Chief Minister Tarun Gogoi from Titabor, Speaker of the outgoing assembly Pranab Gogoi from Sibsagar, former Union Minister and prominent tea tribe leader Paban Singh Ghatowar and Assam Ministers Gautam Roy, Sarat Barkotoky, Ajanta Neog, Khorsingh Engti, Siddeque Ahmed, Bismita Gogoi, Sumitra Patir and Girindra Malik among others.
The BJP’s star candidates in the first phase are Union minister and party’s Chief Ministerial candidate Sarbananda Sonowal from Majuli, Jorhat LS MP Kamakhya Prasad Tasa against the Chief Minister from Titabor, sitting MLA Prashanta Phukan Dilip Paul, along with former AGP minister Hiten Goswami and those who joined the party last year, including sitting AGP MLAs Padma Hazarika and Naba Doley, Congress dissident and disqualified MLAs Kripanath Mallah, Bolin Chetia and Pallab Lochan Das and former ULFA militant Kushal Duwari.

AGP’s prominent candidates are its Working President Atul Bora and sitting MLAs Keshab Mahanta and Utpal Dutta along with former minister Pradip Hazarika.
The run-up to the poll was marked by a high-pitched campaign with high-profile national and state leaders including Prime Minister Narendra Modi, Congress president Sonia Gandhi and vice-president Rahul Gandhi and the Chief Minister leading the campaign trail for their respective parties.

The campaign was characterised by a no-holds barred tirade of allegations and counter-allegations with Congress going all-out to retain power for the fourth successive term while the BJP-AGP-BPF alliance attempts to wrest it from the ruling party and the AIUDF claiming to be the “king-maker” in the next government formation in Assam.
The BJP’s campaign called for a ‘parivartan’ (change) to bring development while Congress highlighted its various achievements, including improvement of the law and order situation during last 15 years of its rule.
The BJP targeted the Chief Minister for his advancing age and accused his government of widespread corruption and failure to bring development in the state while the ruling party accused the Centre for its alleged failure to fulfill the various poll promises made before the last Lok Sabha polls and curtailment of funds and special category status to the state.

Infiltration and sealing of the Indo-Bangla border, security of the region, economic development of the state, skill-development and employment opportunities, power, health, education and welfare of the farmer were some of the major issues that were also highlighted during the campaign.