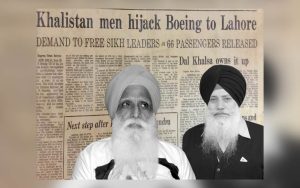 NEW DELHI : Despite Islamabad’s denial of Gajinder Singh’s presence, the accused in the case of the hijacking of an Indian Airlines airplane to Lahore in 1981 appears to have revealed his current location in Pakistan through a post on social media.

A wanted terrorist, Gajinder Singh is the co-founder of a radical outfit known as ‘Dal Khalsa’. According to news agency IANS, Gajinder Singh posted a picture of himself on his Facebook profile on Monday, showing him posing for the camera outside Gurdwara Pania Sahib at Hasan Abdal in Pakistan’s Punjab province.