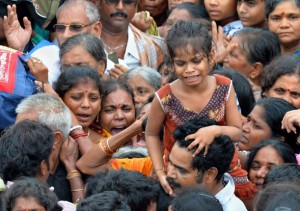 RAJAHMUNDRY: The maha pushkarams of river Godavari started on a bitter note with 18 people breathing their last in a stampede at Kotagummam Pushkar ghat in the city on Tuesday morning. The officials, however are yet to declare the exact number of deaths.

The headcount of the deceased bodies lined up outside the ghat and at the ghat gave an indication of the toll at 17, mostly women. In addition, a woman got drowned in the river taking the total deaths to 18.
The names and other details of the deceased are yet to be ascertained. The police shifted some of the bodies to the Government general hospital. A couple of bodies were still lying outside the ghat.
The ambulances also could not reach the spot due to heavy rush. The staffers of the 108 Service could not attend to the victims in time. All the roads leading to the pushkar ghat were chocked with the pilgrims.
Naidu expresses shock
Andhra Pradesh Chief Minister N. Chandrababu Naidu expressed shock over the death of a woman near Pushkara ghat at Rajahmundry and appealed to devotees not to rush to a single place but use all the ghats.
While the officials did not confirm, the number of people dead in stampede is about 10 and others seriously injured.Mr. Naidu monitored the situation from control room set up there.

While, the CM’s office mentioned one death, Health Minister Kamineni Srinivas while taking to a TV channel said that four women died in the heavy rush at the ghat. He said medical teams too had difficulty in reaching the spot to rescue the victims.
He said the Government would provide compensation to the kin of the dead.