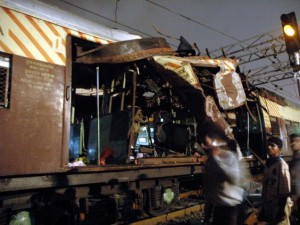 MUMBAI: Twelve of 13 men accused of planting bombs on Mumbai’s local trains that killed 189 people nine years ago, have been convicted. They will be sentenced on Monday next. One man has been acquitted.
Here is your 10-point cheat-sheet to this big story:
Seven blasts had ripped through first class compartments on Mumbai’s local trains in 11 minutes on the evening of July 11, 2006. More than 800 people were injured.
The RDX bombs were kept in pressure cookers and placed in trains on the Western line. The blasts occurred between 6:24 and 6:35 pm, when lakhs of office-goers use Mumbai’s local trains to get back home from work.
13 people, allegedly members of banned organization the Students Islamic Movement of India or SIMI, were arrested on various charges including transporting and planting the bombs and harbouring terrorists at their homes.
15 people accused in the 7/11 bombings are still absconding, among the masterminds, the police say.They say Pakistani nationals and members of the terror group Lashkar-e-Taiba were involved.
The Special Maharashtra Control of Organised Crime Act (MCOCA) court finished trial in August last year.
There was confusion in the case when the Mumbai crime branch had arrested 22 alleged members of the terror group Indian Mujahideen, including its co-founder Sadiq Sheikh. They were later later freed.
Sheikh had claimed that the Indian Mujahideen was involved in the train blasts. The ATS later disregarded this theory and told the court that nothing in Sadiq Sheikh’s narco-analysis test showed his involvement.
The prosecution examined 192 witnesses, including police officers and bureaucrats. Defence lawyers examined 51 witnesses and one person was called in as a court witness.
In 2008, the Supreme Court stayed the trial as it heard a petition by the accused, who had challenged the provisions of MCOCA. Trial resumed two years later, after a go-ahead from the Supreme Court.